By KEN HAMWEY
Staff Sports Writer
Holliston High’s softball team was in rebuilding mode a year before the covid-19 pandemic struck. Winners of only four games in 2019, the program now is moving forward in spite of having its momentum stalled by a virus that forced the cancellation of last season’s schedule.
If the Panthers hope to bounce back and emulate something close to their 14-6 record of 2018, they’ll need a blend of talent and strong leadership to right the ship.
Enter Madison Umlauf. 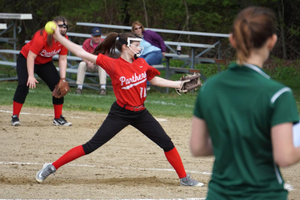 The 18-year-old Holliston native was on board for the 14-6 season as a freshman and she played a key role on the four-win team her sophomore year. Extremely versatile, she’s able to play any position. As a freshman, she played second base and hit .311. As a sophomore, she pitched and was credited with three of Holliston’s four victories. She also hit .343, collecting 23 hits and 6 RBIs.

Her coach, Don Quindley, who took the head coaching reins when Umlauf was a sophomore, says she’s “like a coach on the field.’’
“Madison is versatile, has an incredible work ethic and she’s a great leader,’’ Quindley said. “She was selected as a captain after her sophomore season. Very athletic, she has a high softball IQ and she’s a very capable hitter, pitcher and catcher.’’

Quindley admired Umlauf’s coachable nature when he was trying to find the right position for her. “Madison understood we were building for the future,’’ he emphasized. “She just said to play me where you need me.’’
The coach knew what role was right for Umlauf when the Panthers played Framingham. She pitched and the end result was a victory, thanks to her mound work and also her ability at the plate.
“The game went nine innings and I struck out 13 and walked only one batter,’’ she recalled. “In the bottom of the ninth, I doubled to drive in the winning run for a 7-6 win. That game was thrilling and so has being named a two-time captain.’’
The 2021 season is Umlauf’s last as a Panther and she’s got some specific goals. “I’d like to see us win as many games as we can and I also want my teammates to have fun, especially after having last season canceled,’’ she noted. “This should be a year of re-connecting. My personal goals are to hit .400 and to develop a successful rise ball pitch.’’
At Local Town Pages deadline, the Panthers were off to a solid start. They were 3-1 and Umlauf’s hitting and pitching stats were outstanding. Her pitching record was 2-1. Offensively, she was hitting .600, had 12 RBIs and 1 home run.
A captain who’ll lead by example, the 5-foot-7 Umlauf also will set a positive tone. “I’ll be vocal but it’ll be in a positive and encouraging way,’’ she said.
When the season was canceled last year, Umlauf displayed lots of leadership. She spearheaded a fund-raiser for the program and it raised $1,000. “I tried to keep our team connected,’’ she offered. “It was a way to keep the team spirited.’’
Umlauf’s competitive style focuses on being aggressive and intense. “At the plate, it’s all about getting the best hit possible,’’ she said. “And it’s about owning what you get. In the field, confidence and communication are important, and on the mound it’s relying on your fielders and communicating with your catcher.’’
Opposing hitters never know what they’ll be served with Umlauf on the mound. She throws a fastball, change-up, a drop, a drop curve and a screwball. Her favorite position is pitching and the outfield ranks second.
“A pitcher has lots of control of a game,’’ she said. “There’s pressure but I do well in pressure situations. I like the one-on-one aspect of me versus the hitter. Also, there’s a sense of security when I’m pitching because teammates are backing me up.’’
Umlauf, who has run the 55-meter dash in indoor track for four years, was disappointed and a bit frustrated when the 2020 spring season was canceled. But, she’s pleased to get another chance to compete, especially with her senior year heading for the finish line.
“I’ve played club softball for five years and I played last summer with the modifications that were imposed,’’ she said. “We’re all co-existing with the changes and just glad we’re competing. I firmly believe that we must learn from the pandemic. There’s knowledge to be gained and we must use the struggle as a reminder not to take anything for granted.’’
One thing Umlauf won’t take for granted are Holliston’s other senior captains — infielder Caitlin Damigella and pitcher/first baseman Rutu Tatke. “They’re both motivated and positive,’’ she said. “And, Caitlin is very inspiring while Rutu is very unifying.’’
Also drawing praise is Quindley, Holliston’s former jayvee coach who took the varsity reins from Jen Picardo. “Coach Quindley is invested in the team,’’ Umlauf emphasized. “He’s always optimistic and he gets the best out of his players.’’
An honor student for four years, Umlauf will play softball next spring at Rutgers University at Newark, a Division 3 college. She’ll major in neuro-science and aim for a medical degree. “A smooth transition to college ball will involve getting comfortable with new teammates, communicating well, and adjusting to a faster mindset,’’ she said. “And, the talent level will be challenging.’’
Focusing on an athletic philosophy that stresses winning, Umlauf says she chose a team sport to have fun. She also chose a team sport because of valuable life lessons that can be learned.
“The most important life lesson one can learn from sports is how to work in a team environment,’’ she said. “Overcoming adversity is another key lesson that’s valuable and sports also help us to be compassionate leaders.’’
How well the Panthers play this season has yet to be determined. Umlauf initially set a .500 record as a goal but now she’s hopeful and optimistic  that “rebuilding is behind us.’’
And, when she heard that Quindley regards her as a coach on the field, she was humbled by the comment. “I was flattered by those words,’’ she said. “It shows that my commitment is admired and appreciated. It’s beyond a great feeling.’’
And, now that the 2021 season is underway and is indeed a reality, Madison Umlauf says the chance to qualify for the tourney as a senior is simply “awesome.’’