Medway Boy Scout Josh Auler, organized and oversaw the building of a prayer labyrinth for his church, Christ the King Lutheran Church in Holliston, as his Eagle Scout project.

When Josh Auler, 17, a senior at Medway High School and member of Medway Boy Scout Troop 367, was searching for projects to work toward his Eagle Scout award two years ago, he wasn’t sure what he wanted to do. 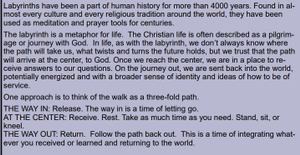 This message on how to use the new prayer labyrinth recently appeared in the Christ the King newsletter.

“Early last year, around the spring, I started looking for projects,” said Auler, in December. “I was thinking about all the different places I could go to get ideas. I was going to go to the Holliston Rail Trail Committee, but then I started asking around at my church in Holliston, because Eagle Scout projects can be for religious institutions.”

Auler attends Christ the King Lutheran Church in Holliston. Church members had entertained the idea of a meditation trail, but that didn’t work forADA regulations due to the slope, he said. “Then, they told me about this other project, a prayer labyrinth, which had been their idea for a couple of years.” The original idea, he says, came from church members Joanne Hynes and Martha White, and another church member, an engineer named Meredith Reynolds, had drawn up a design.

“I took a look at the area and the design, and that’s when I knew I wanted to do that project,” says Auler, who finished the project right before Thanksiving, with the help of his fellow Boy Scouts and church members, especially, he says, Wayne Stoll, who helped out with an integral piece of equipment – his tractor.

“The important thing that I tell the Eagle candidate is find somebody you want to help and some place you want to help, and let your project flow from there,” says Greg Green, a leader with Boy Scout Troop 367. “(Josh’s) family are members of the church, and this is an idea that had been floated for many years.”

Al Jesness, explained how church members had spoken about it prayer labyrinths they’d seen in Camp Calumet, in New Hampshire. “They thought it would be nice to have one at Christ the King, and the location we picked was just a shady area that grows moss.” The labyrinth, he explained, would include prayer stones that members of the congregation have been creating. “On Sunday morning, you can take one of these stones, and if there’s something you want to unload or get off your chest, you can write on these stones and put it in the basket. The intent was these prayer stones would go into the labyrinth” at the base of the cross.”

Jesness describes the work Josh and his crew did as “phenomenal. I think (Josh) learned a lot about organizing and planning.” The project, said Jesness, required fundraising to purchase cobblestones and stone dust as well as working with a retaining wall.

“There was a lot of grunt work, but also a lot of planning,” said Green. In the middle of the project, for example, Josh found out the cobblestones he’d ordered wouldn’t get there in time, so he had to find another source. Green also pointed out that Josh had to coordinate volunteers, working with them to find times that worked, as well as performing temperature checks during the pandemic.

“There were definitely a lot of changes over the course of the project,” said Josh. “For example, in the beginning, it took an entire day to dig out that wall, which took longer than I thought it would, and also we made some major design changes material-wise. I thought it would be a lot easier, but it turned out to be a lot harder,” said the Scout, “But I did learn a lot about leadership and how to org everyone to come together and finish the project.”

Of his volunteers, Josh said, “I think they did a great job with the direction that I gave them. Some of them had more landscaping experience than I did, but everyone worked hard, and in the end, it looked great.

The design of the labyrinth, says Auler, is designed to push water away from the church. “It’s effective at that, and it looks really aesthetic with the stones, cobblestone and the marble chips in the cross.”